The Crown Royal Noble collection is a series of limited annual releases that celebrate the skilled craftsmanship of their master blender. This second expression showcases their Fine De Luxe whisky finished in Cabernet Sauvignon wine barrels. The result is intriguing, rich, and smooth.

Availability: 15 in stock (can be backordered)

Vital Stats: The mash bill is presumably the same combination of the 50 different whiskies used to make Crown Royal’s traditional blend. Aged for six months in Cabernet Sauvignon barrels from the Paso Robles region of California. The price varies between $45 and $60 per bottle.

Appearance: Light amber, honey colored. The legs are slow-moving and sticky like water drops sliding down a window on a rainy day. 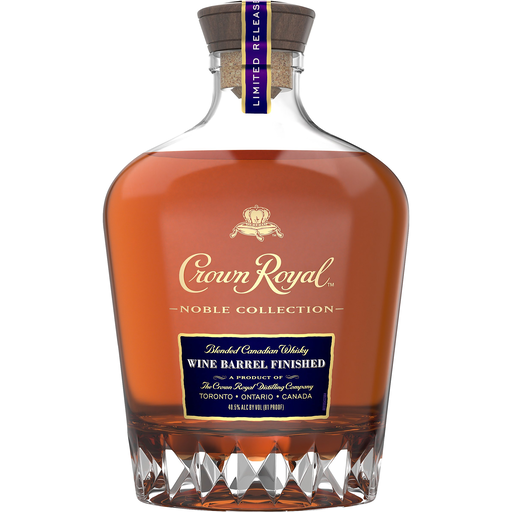 Nose: When I first opened my sample-size bottle, the scent was very astringent and almost unbearably boozey. There’s definitely a lot going on here; it’s an interesting combination of minty mouthwash and butterscotch with dark fruit sprinkled on top. A day or two after I opened the bottle, the smell mellowed out a little.

Palate: This whisky tastes better than it smells. Dried fruit and butterscotch coat my tastebuds, and it finishes off with a grainy, oaky flavor that isn’t necessarily great but definitely isn’t bad. I feel like there’s so much going on that I don’t have time to stop and enjoy the dried blueberry or the butterscotch sweetness because the next flavor comes so quickly. I want the flavors to slow down, give me a little time to ponder and then we can move on.

Nestled on the edge of Lake Winnipeg, Crown Royal’s distillery in Gimli, Manitoba, is home to 1.5 million barrels of delicious whisky that sit patiently waiting to be shared with the world. One of Manitoba’s natural beauties, the town of Gimli hugs the western shoreline of one of the world’s largest freshwater lakes, with sandy beaches, an active harbor and the largest Icelandic population outside of Iceland.

**Local retailer states either in stock or in route to location. Usually ships within 1-4 days. (Mon-Fri) Longer than usual processing times may occur during the Holiday Season. The entire network of licensed retailers continue to work effortlessly fulfilling orders as they are placed however due to COVID-19 regulations some delays may occur. Select items may become backordered due to current high demand and will ship out upon arrival. Please refer to our terms of service and cancellations & returns policy.