Glen Moray 21 Years Port Wood Single Malt Whisky, Glen Moray is currently controlled by French conglomerate La Martiniquaise, and a substantial portion of their malt is blended into Label 5, a popular blend whisky in France. The parent company also owns venerable port label Porto Cruz, which handily supplied the necessary wood for the 21 year port wood cask finished expression reviewed here. Glen Moray has historically been one of the most willing distilleries to focus on nontraditional barrel finishes, incorporating a multitude of wine barrels including chenin blanc and chardonnay into their repertoire.

The Elgin Heritage collection debuted in 2016 with the 12 year, 15 year and 18 year expressions. Glen Moray had previously been praised for their high quality, affordable drams. The 21 year, Portwood finish is the oldest of the Elgin Heritage collection and the newest addition to the roster. Released in 2019, it was aged for 19 years in ex-bourbon barrels and finished the last two years of maturation in port barrels from Porto Cruz. It was originally only sold in Edinburgh at the Whisky Fringe Festival, though now roughly 4,000 bottles have been released worldwide. Not a huge release by any means, but it is far from experimental.

This isn’t Glen Moray’s first foray into the 20+ year old whisky market, but it is their most recent and the one most heavily marketed as an entry into the world of well-aged, luxury whiskies. Given their history with solid, value minded whiskies I’m more than willing to give them the benefit of the doubt. Let’s taste! 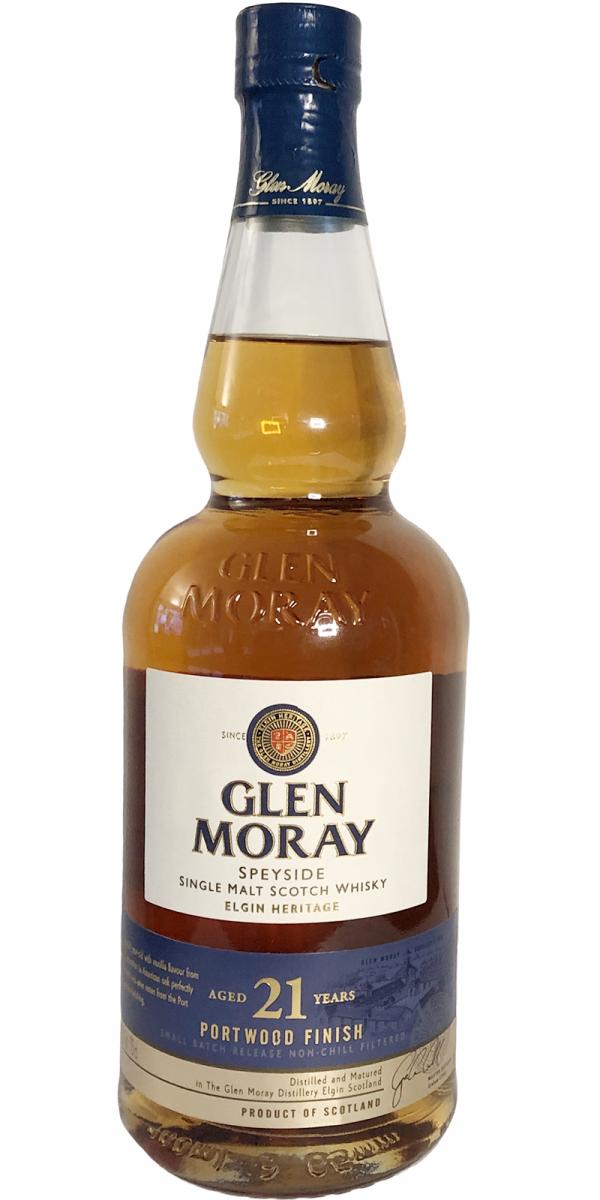 Appearance:  A thin, radiant amber, quite a bit less tawny than would be expected. There’s light sheeting with medium length legs.

Nose: There’s a very nice representation of ripe plums, vanilla Werther’s candies, and golden cane sugar, with blueberry scones and crystalized ginger lurking underneath. This whisky is very pleasant, if a touch unremarkable for a whisky of this age, to smell.

Palate: The opening salvo is sweet and a little prickly, with waves of ripe dark fruit and caramel. There’s a good amount of oak tannins that mingle with a ginger-y spice and there isn’t quite as much richness as one might expect from the nose and the barrel treatment. Baking spices and Armagnac soaked prunes appear towards the end. There’s also some spicy milk chocolate, as the distillery provided tasting notes emphasize, which is interesting though perhaps a touch counter to style.

The finish is medium length and quite enjoyable, with the oak really holding the sweetness in check, making it easy to come back for more. It comes across as remarkably balanced and lean, for better or for worse.